Hayate no Gotoku! Ojō-sama Produce Daisakusen Bokuiro ni Somare! (Japanese name) is the second Hayate No Gotoku video game created by Konami for the Nintendo DS platform. There are two versions of the game that were released simultaneously on March 14, 2008. Both versions differ greatly as the first version is set at Hakuo Academy while the second version is set at the Sanzenin Mansion. Unlike the first game, the second game has more of the RPG element where you need to train (or produce as it is called in-game) skills for your character. You can choose 6 characters at first but you will be able to choose a secret character once you finish the game.

There are 7 main characters in this game. Players will have to train their character so they may learn some attacks or tricks to make an appeal at contests. Players may easily trade data with other players using wireless connections (however, the game is not Wi-Fi compatible). There are also many Konami parodies included in this game. Players are able to control where characters go and talk to gather information in continuing the story. As a bonus there are a couple of hidden stories or voices that can be unlocked by passwords. After completing the game, unlock voices in Omake Mode with the code: "↑ ↑ ↓ ↓ ← → ← →". 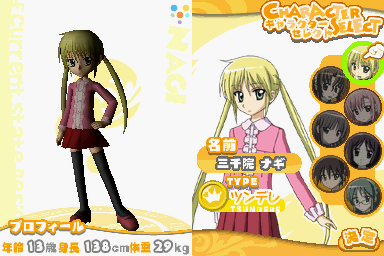 There are 7 stories for each edition. 3 of these stories are the same for both versions, 4 stories are unique to their version giving a total of 11 stories for both versions of the game. Each story represents a certain character. At first, you will be able to play 6 different characters so you will be able to play 6 different stories and once you finish the game through any character, you will unlock a secret character. Each version has its own characters:

Community content is available under CC-BY-SA unless otherwise noted.
Advertisement